I was in Trader Joes.  I thought of green peppers, and immediately a new recipe was formed inside my head. Seemed simple enough…
Take garlic… 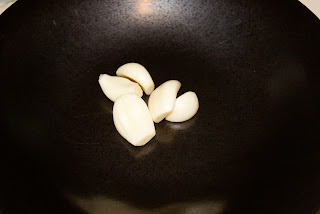 …and some green pepper.  Saute in olive oil. 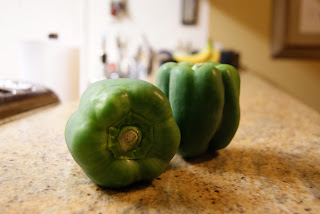 Luckily I found Sweet Italian Sausage, and on sale at Sprout’s in Pasadena.  I covered them so they cook slow and even, and when I took the cover off, the sausages were spraying juices out of themselves.  I’ve never seen this before.  So beware…. 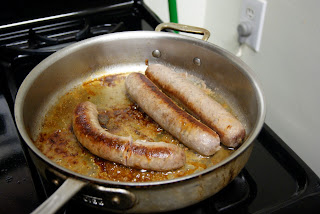 As sausages browned, I boiled the water and added my gluten-free pasta choice, fusilli. I was a bit skeptical of this Trader Joe’s brand because I have been having issues with their spaghetti turning to mush.  But I cooked it al dente and no mush. I added my Angry Spaghetti Sauce to the pasta, then cut up sausages into bite sized pieces.  Added the garlic and peppers and mixed. 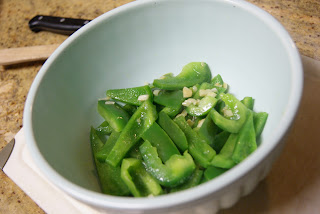 I put mixture in an oiled casserole dish and added the cheese. My daughter is also lactose intolerant, which is why you see two different cheeses. Covered in foil, put in the oven and listened to my daughters complain about it taking too long. We did have a late dinner. Did not eat until 8:30, but it was worth it. 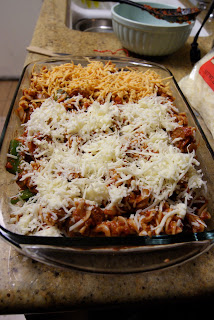 The flavor is sweet, with a bit of spice.  The only thing I might do different is cook the green pepper longer. It was a bit too crunchy for me. 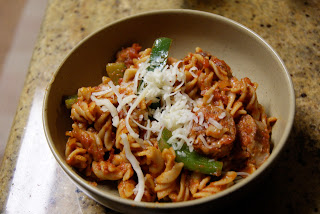 As I ate my newly created dish, I wondered what to call it. After I was done eating, and here writing, it came to me:  “The Bom” Pasta Dish.  As I was cutting the green peppers, I thought of my grandma and was taken back to her kitchen in Chicago. I hadn’t thought of that kitchen, maybe ever until I smelled those peppers. They reminded me of my grandma. Us cousins called her Bom, short for Bommer.  It’s the perfect name for this “Bom-Ass” dish.
And it is Simple enough.